Your ONE place to FIND the best sandwich shops and delis in Johnson City, Kingsport, and Bristol. Sort listings by name, distance or rating.

The first Macado’s restaurant was opened in 1978 by Richard Macher in downtown Roanoke, Virginia. It soon became popular for its eclectic ambiance of cartoon, antique, and local nostalgic decor, as well as its wide array of hearty yet modestly-priced sandwiches, subs, and entrees.

Popular with the college crowd, the restaurant opened additional locations near Virginia Tech, Radford University, and Roanoke College. Locations were added at the rate of one or two per year, including those in neighboring West Virginia and North Carolina. Some Macado’s are located in malls, such as Mercer Mall in Bluefield, Grand Pavilion in Roanoke, and Concord Mills in North Carolina (near Lowe’s Motor Speedway). Other locations cater to the downtown business crowd, such as Farmville and Galax.

The already-lengthy menu has been changed and expanded over the years, and several events have grown in popularity, such as the Macado’s Annual St. Patrick’s Day Party and the Macado’s Halloween Party. Loyal customers have made Macado’s part of their own traditions as well!

See you at the DO's!

Model City Tap House first opened in downtown Kingsport on August 5th 2016. We are be located on the corner of market and cumberland streets next door to Up Against the Wall gallery. Specializing in craft beer and steamed sub sandwiches, MCTH features 20 craft beers on tap that will continuously rotate to keep fresh beers being poured every time you come in. You will have the options of grabbing a pint for here or filling your growler and taking it to-go.

Being raised in Amish homes, Tim and Rachel both grew up with plenty of good quality home cooking! Having this deeply rooted in our heritage, it is an important part of our life! We sell to you what we use ourselves on a daily basis. High Quality at an affordable price is of utmost importance to us! We sell to you at a price we would like to pay! We buy in bulk, bag it out and sell it to you without the high cost of fancy packaging. Our products are also available in large quantities at our lowest price possible! Our goal is to be of a service to the community, we are a small business helping small business's. We support our community by promoting local foods and business's! We moved here to Chuckey TN, from Ohio in 2000 and we love being here! Its a wonderful place to be! We have been blessed with 5 children, 3 boys and 2 girls. They play a big part in our lives along with the business and as they grow up you will begin to see them more and more involved in the work force here, other wise they stay busy with school, mowing yard, working in the garden, hanging out laundry, swimming, camping, fishing and all the other fun things that makes their lives go around. We are blessed and love being here with all of you! 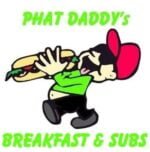 PHAT Daddy's Subs serves awesome breakfast sandwiches, home made home fries, huge subs, paninis and wraps. All served with a side of fresh home made mac&cheese, potato or cole slaw. Your choice...Come check us out! It's a JERSEY thing

We are a little shop on the corner where you can find anything from premium cigars, pipes, and tobaccos to hand dipped ice cream, Reubens, and hot dogs to having a key duplicated!

The Bagel Exchange brings a quick delicious breakfast and lunch to Downtown Kingsport. We offer a variety of bagels with gourmet cream cheese, bagel breakfast sandwiches, an amazing array of delicious coffee, as well as a great lunch menu. Come grab a bite of New York!